it's happened. every fringe there is one night out that defines the month; that involves either some epic success, failure, alcohol related incident... or all three.

last night was that night.

the evening didn't get off to a great start as we had a very 'difficult' show, shall we say. there were a number of technical and sound problems that threw us and the show suffered a bit as a result, so we were feeling a bit down afterwards and in need of some sorrow drowning.

we started with a few drinks in the pleasance dome before heading over to the three sisters for another gig we were doing at a quarter to one. or so we thought. when we arrived we found out they'd muddled the dates up and we weren't doing the gig until next week. so our spirits raised by the new prospect of a night's uninterrupted drinking ahead meant we headed back to the dome. 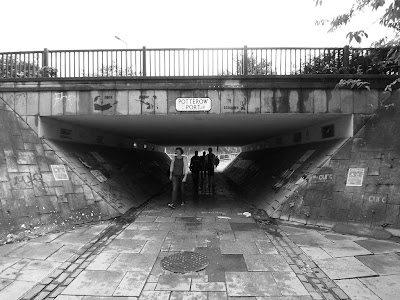 now if you know edinburgh, you'll know there's a little underpass on the way to the pleasance dome with two slight sloped walls either side. it looks like this:

obviously, after a few drinks it becomes so much more than an underpass. it becomes a mini parkour playground as you run up the sloped walls giggling like a little child at how much more fun it actually is than it really should be.

and that's when it happened.

lee launched himself up one of the walls with just a bit too much pace and enthusiasm, and not quite enough spatial awareness and smacked the top of his head on the cement ceiling.

we all laughed hysterically, naturally, while lee stumbled around clutching his head and trying to laugh it off. it was only a minute later when he took his hand off his head and saw it had blood on it that our laughter turned to concern (for a minute or so) and we realised he'd actually done some damage to his noggin.

apologies if anyone's squeamish but this was what his head looked like (of course we took photos before seeking medical help- we've got a blog to maintain)... 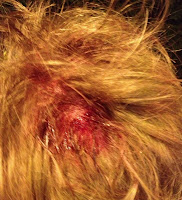 so we found a first aider in the Pleasance (embarrasingly he's also a colleague of lee's at soho theatre) who checked he wasn't concussed and took him off to clean up the wound.

when lee returned fifteen minutes later it was clear they had literally added insult to injury and dressed the poor guy up like whistler's mother... 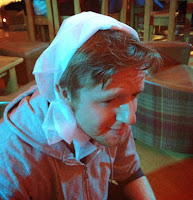 the only suitable dressing they had for a head injury was to fashion an arm sling into a rather fetching bonnet to keep the pressure on the wound and more importantly, make lee look ridiculous for the rest of the night.

after all that we decided that we definitely needed another stiff drink so we headed to abattoir bar and then the assembly loft bar and crawled home at gone five this morning.

so you can guess how fresh we felt when we went for lunch just now with our agents and all their other acts... not our finest hour.

the good news is lee's fine and (after a nap) we'll all be raring to go again tonight. we just may lay off the parkour for a while....