It's amazing how quickly we've slipped back into our Fringe routine. The late nights in Brooke's bar... the visits to Scotmid at 3am... walking upstairs to find the gimps doing this to Richard... 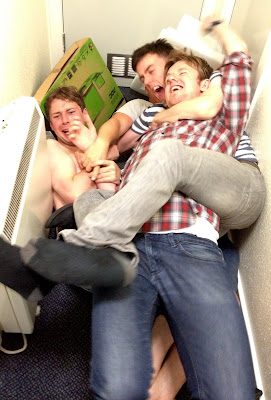 (there are four grown men in that pile)
Paul and Lee are big fans of WWE wrestling which is all the excuse they need to experiment with the latest finishing moves on poor old Rich. I say poor old... We know he loves it really. Look at that face.
The show last night was a bit of a 'second night' show. We weren't gripped by the same first night terror of the night before, so the show wasn't quite as slick as it could have been. We're still tinkering with it though, and getting used to the space, so after our final preview tonight we should be pretty much there.
It's a really fun show this year, much more so than previous years. It's less technically reliant, less 'dark' and just a lot more silly which is quite liberating for us as it means when things go wrong it's less obvious and we just go with it. We're all a lot more relaxed on stage this year.
Now that our show's up and running we're not spending all day re-working and rehearsing bits so I'm going off to see my first shows of the Fringe this afternoon. Let's hope Richard's still alive when I get back.
david.