We all got out and about yesterday to see some shows, which was good as it's great to see friends in other shows but also to not be thinking about your own one for a change.

We bumped into Dan Cook of erstwhile sketch group Delete the Banjax who was dressed as our own Matt. Or maybe it's the other way round. We're not sure. Looking forward to seeing his debut solo show this year. 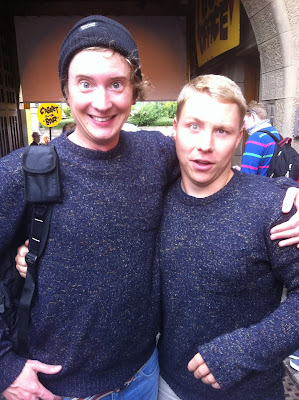 Then in the evening we went out flyering before our show. You might think after five years of doing the fringe we either wouldn't need to, or we'd be too proud to flyer. You'd be wrong on both counts. To tell the truth we quite enjoy our unique style of flyering. People familiar with our technique will know that we take a couple of gimps out on a lead and offer them out to members of the public to do pretty much whatever they want to them, while the other person hands out flyers and tells people about the show.
Lee was on the receiving end of a rather overzealous lady on a Hen night yesterday. She took a pink paddle to him. This wasn't just for the camera either, she really went for it. Lee's cheeks were red raw by the time she'd finished with him. What's worse... he had to sign the paddle she'd used to spank him with afterwards. That's right, she made her victim sign the weapon he'd been beaten with. 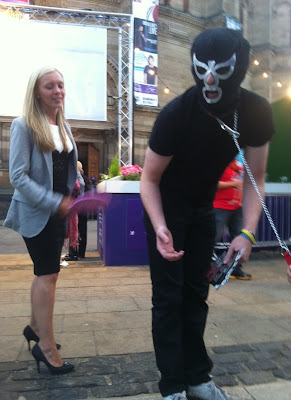